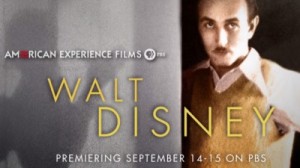 Part 2 of the PBS documentary, American Experience Films: Walt Disney, had great potential because it was about the latter part of his life, the part where he created Disneyland! And that section of the film truly was interesting. Even though I had heard the story from various sources, seeing the time-lapse footage of the park being built was so neat to watch.

Unfortunately, everything leading up to the creation of Disneyland – starting with the strike before World War II – takes a very cynical, unfair look at the man who is not here to defend himself. They make claims such as Disney was avoiding the strike when he took a ten week trip to South America. They fail to mention that he was asked to go by our government! Learn more here: Adios El Groupo! They ignore his voluntary help toward the war effort by allowing troops to use his studio and making propaganda films for the USA at extremely low cost. They paint him as a man whose studio was continuing to fail and whose health was steadily declining. While partially true, they conveniently skipped over the fact that Dumbo actually made the studio money! Dumbo is barely even mentioned, except that it happens to be part of the Big 5:

They made it seem as though he ignored the studio after the war in favor of playing with his new rideable model train, The Carolwood Pacific. In all truth, Disney was a workaholic. He spent hours at the studio, and later at the park, constantly trying to improve the product he had his name on. He needed to take a break doing something he enjoyed purely because it was fun. He did not worry about the pictures the studio was making as much because he had trained his staff to do things the way he wanted them done. He left people he trusted in charge of making his animated features and moved on to find new things he could try: Live-action films, television, theme parks, and city building just to name a few.

Of course, they just couldn’t help bringing up Song of the South. They again made him seem like a bud guy. Like he asked for the advice of several different black organizations and then ignored them. Walt wasn’t interested in making a movie about political controversies. He wanted to tell stories that were entertaining. He did not simply ignore the advice he was given. He adapted and accommodated to some extent, but it was still his movie and his final decision.

One thing I noticed throughout the doc: Whenever interviews were shown from people that knew and worked with Walt, they were all very respectful and positive. They loved him! They loved what he stood for and what he did. They saw his brilliance and his dark side and still respected him for who he was. It was only the people that didn’t know him that felt they could criticize and analyze his every decision.

One thought on “The PBS Walt Disney Documentary – part 2”